By dint of perseverance, Harold Lloyd, the modest son of Burchard, Nebraska, became the prince of Hollywood, California, where he lived the Horatio Alger dream. His life and his memorable films alike echo Alger’s theme of young men who apply themselves, rising from rags to riches or from obscurity to celebrity. Like the famous scene in Safety Last! (1923) in which he lifts himself to firm footing after dangling precariously from the hands of a clock atop a skyscraper, Lloyd climbed his way up. The everyman in the horn-rimmed glasses rose from being a no-name bit player to the enviable position of celebrated proprietor, producer, and star at his own studio and the most prolific among the silent comedians of the 1920s.

Lloyd decidedly wasn’t Charlie Chaplin or Buster Keaton, to name the other two members of America’s triumvirate of silent comedy. We watch Chaplin and wonder whether the Tramp will end up happy or sad—or both. We watch Keaton and puzzle over his deadpan: Is he pleased or peeved? We watch Lloyd and don’t mull over his character’s inner life at all. It is enough that he makes us laugh. The “overriding virtue” of Lloyd’s work, wrote Richard Schickel, is that it is “simply and consistently more hilarious than the work of any contemporary other than Keaton.” Amen to that. Understand, though, that there is more to Lloyd than laughter.

Yes, his feature-length comedies—which include Safety Last!,  The Freshman (1925), and The Kid Brother (1927)—boast more laughs per minute than anything this side of The Naked Gun. No doubt this contributed to his popularity. But Lloyd movies have another advantage over those of his celebrated comrades: while Chaplin and Keaton are often more preoccupied with overcoming the immediate challenge than with getting the girl, in this regard Lloyd is their opposite. Safety Last! ends not when Harold saves himself from danger but when he kisses his fiancée, Mildred (Mildred Davis, who wed Lloyd in real life in 1923). Likewise, The Freshman wraps up not when our hero wins the big game but when his crush, Peggy (Jobyna Ralston), writes him a love letter. And the romance in The Kid Brother is perhaps the sweetest of all.

“I watched it with a counter in hand and reckon that it averages three good laughs per minute.”

The film is the sprightly saga of Harold Hickory, a hick from Hickoryville and the reedy sibling in a family of barrel-chested musclemen. Made at the apex of Lloyd’s career and of silent film, it is the most lyrical of his features and, arguably, the funniest. For many years, he cited it as his favorite among his movies. I watched it with a counter in hand and reckon that it averages three good laughs—from giggle to chuckle to guffaw—per minute. A 1927 review in Variety supports my tally: “Harold Lloyd has clicked again with The Kid Brother, about as gaggy a gag picture as he has ever done. It is just a series of gags, one following the other, some funny and others funnier.” Variety was wrong about one thing, though: it’s not just a series of gags—it’s a series of gags with a tender romance that runs through it, and a terrifically funny and suspenseful action sequence in its third act.

Early in this Cinderfella tale, we meet Harold’s father (Walter James), Hickoryville’s sheriff, and his two older brothers (Leo Willis and Olin Francis) as they transport tree trunks the circumference of sequoias. Then we meet Harold himself, the homemaker in this all-male household, as he works a churn plunger that’s roughly on the scale of a broom handle. As Lloyd’s silent comedies seem to exist in a pre-Freudian universe, the contrast between the he-men hefting timber and the boy with the spindly plunger is not played the least bit salaciously.

Now, Harold may be a hick, yet note the efficiency and genius with which he has rigged the churn within an interconnected series of time-saving devices for doing the family laundry. What Harold—both the character and the man who plays him—lacks in conventional manliness he makes up for in mechanical and comic invention. Harold Hickory’s marvelous system of combining dishwashing, drying, and stacking duties is similarly breathtaking.

Yet these charming vignettes reveal neither the breadth of the movie’s scope nor the delicacy of its tone. Ultimately, directorial credit for the film went to Ted Wilde and J. A. Howe (Lewis Milestone was initially hired as director but left due to contractual issues with another studio). All the directors—including Lloyd, who took producer credit only but whose sensibility dominates the direction, here as in all his films—collaborated on a film more visually atmospheric and naturalistic than his previous features. Another factor in The Kid Brother’s unusual look is that cinematographer Walter Lundin shot the movie on panchromatic film, more sensitive to the entire spectrum of light and thus less contrasty than Lloyd’s earlier films.

The film opens with a graceful panorama of a cove at sunset, a ship adrift in the water, and a medicine-show wagon weaving up the road in the middle distance. Both vessel and vehicle will play important roles, as will the woman in the wagon. She is Mary Powers (Ralston), the medicine show’s proprietress—a dark-eyed young woman who has been recently orphaned. The breathless seconds during which Harold and Mary first see each other make for as tender and romantic a meet-cute as any in the movies. She is hiding in the woods outside Hickoryville from the medicine show’s leering roustabout, Sandoni (Constantine Romanoff), who has tracked her on her afternoon ramble. Harold, feeling humiliated after his father and brothers went to town to pass a resolution for a new dam and left him behind—the meeting is for men, not boys, his father tells him—has been on a walk of his own, angrily beating the bushes with a stick. Mary jumps out, expecting to confront Sandoni. Harold beholds her, an angel in calico. Mesmerized by her radiance, he mistakes the backlighting for her halo. Taken by his warm smile, she feels her fear melt away. The scene strikes a primordial note, as if it were Adam and Eve’s first rendezvous. (Carl Davis’s Aaron Copland–esque score, composed in 1989, nicely complements the moment.)

But look! Here comes leering Sandoni, fully two heads taller than Harold and resembling a muscle-bound Nosferatu. Defending Mary’s virtue, Harold bran­-dishes a stick at the roustabout. Unbeknownst to Harold, a snake has coiled itself around his makeshift weapon. First Sandoni sees the snake and scrams. Then Harold sees the snake in his Eden and is sad that it was the serpent and not he who scared Sandoni away. Finally, Mary, relieved that Sandoni is gone, sees the snake and bounces into Harold’s arms as if her shoes had springs. 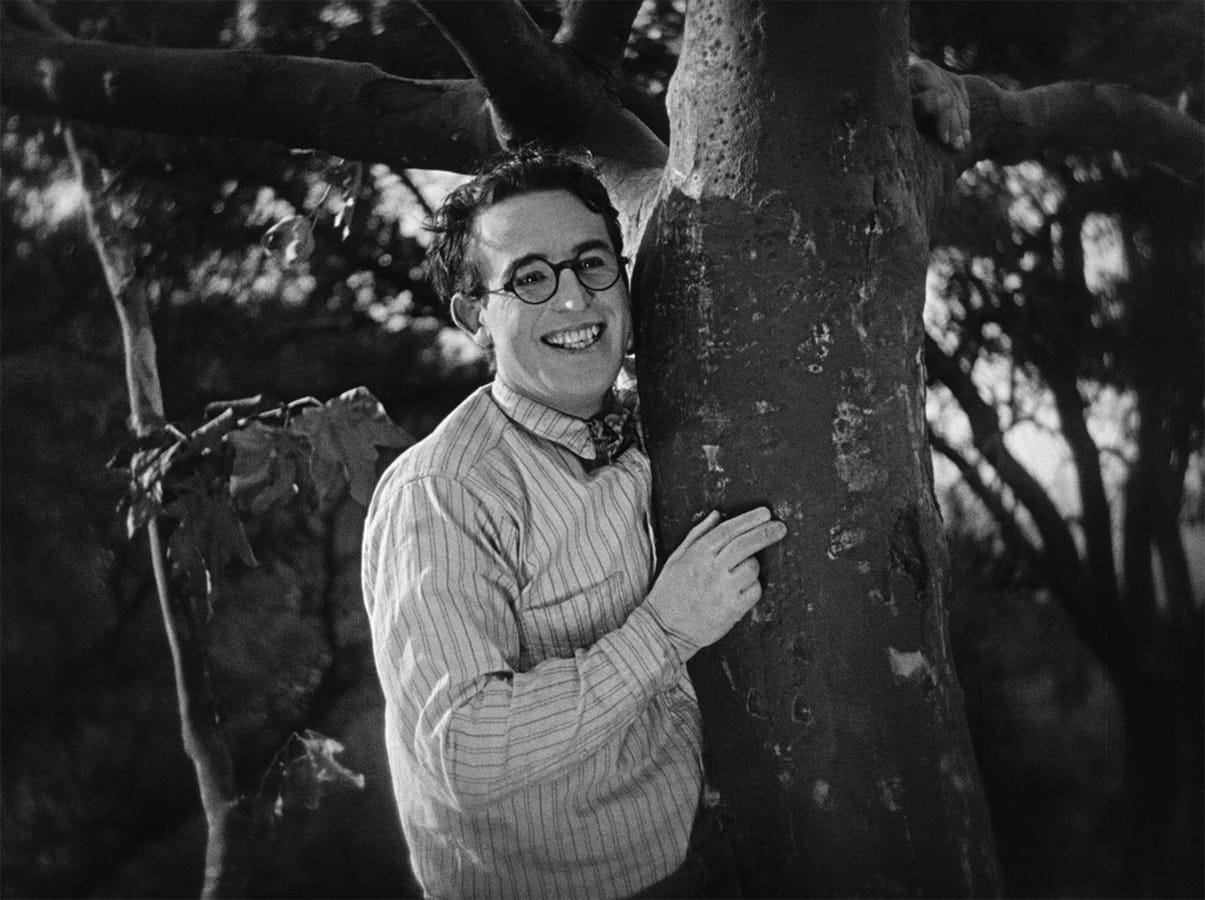 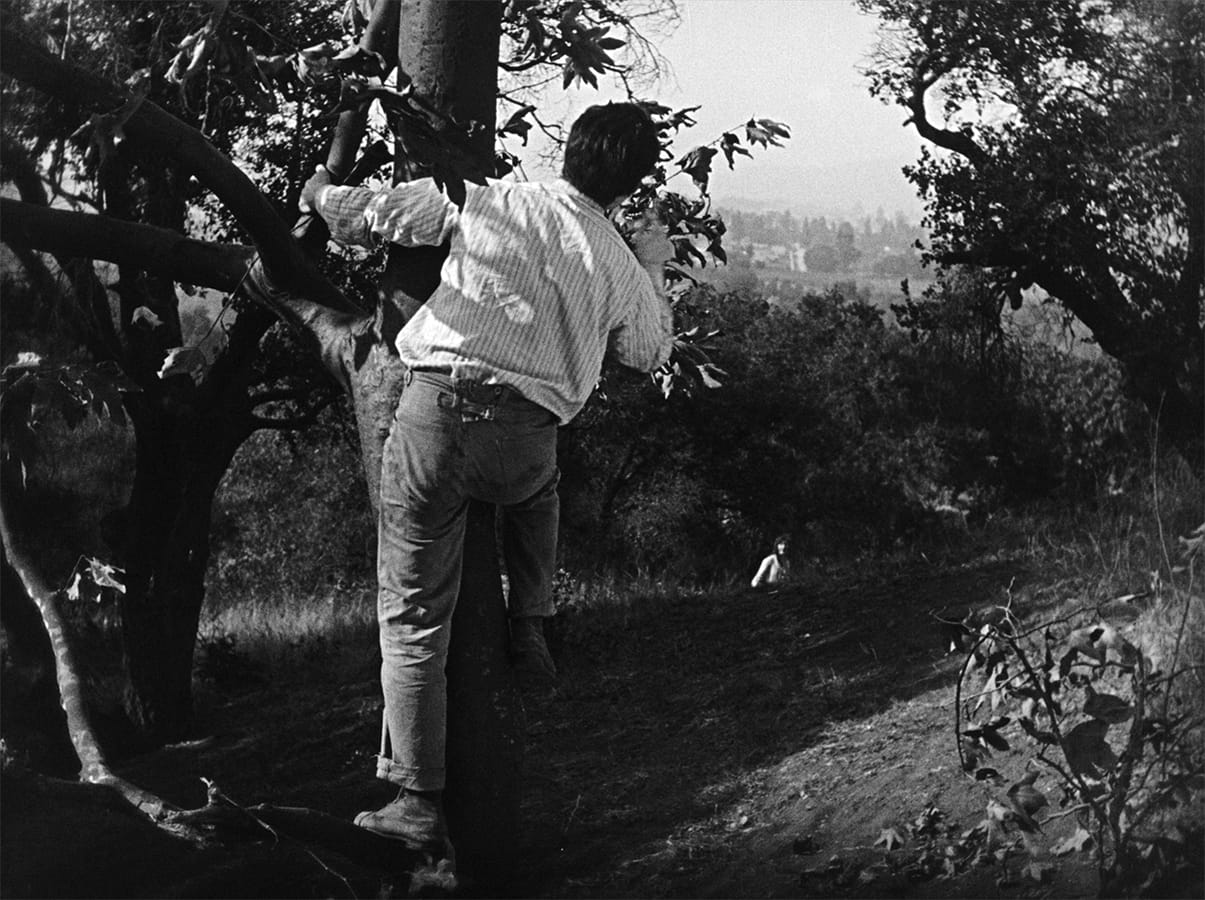 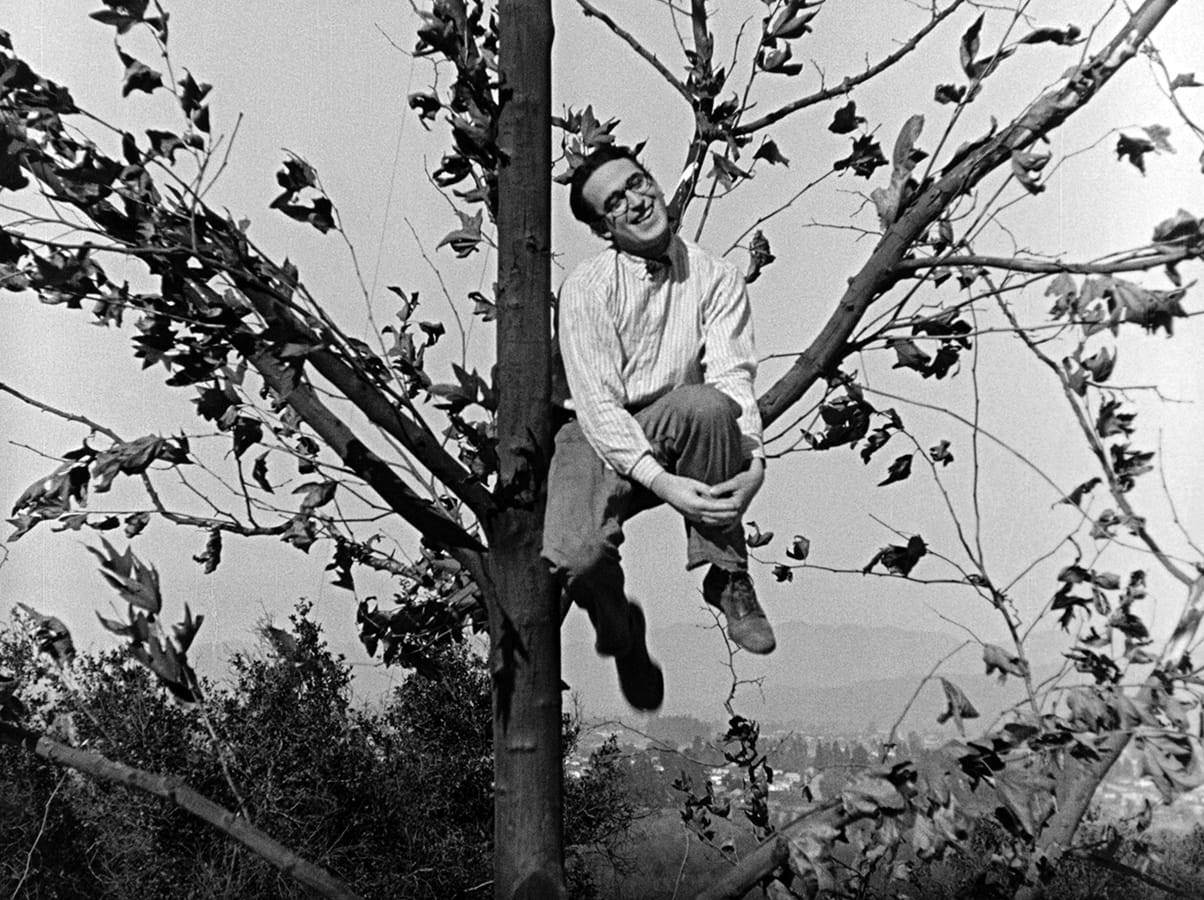 Lloyd composes his best sequences in such rhythms of three, what vaudevillians called the “comic triple.” Consider the next scene, in which the couple stroll together before reluctantly taking leave of each other: Harold watches Mary walk away; she goes over a rise and out of his sight, so he clambers up an oak tree to maintain his view of her receding figure. How does the camera keep Harold in its sight as Harold keeps Mary in his? The production built an elevator next to the tree, enabling a graceful vertical movement that shows Harold rising in altitude as he falls in love. When Harold reaches the lower branches, he sees her and calls out to her to ask her name. She answers and vanishes again. He scampers higher. “Where do you live?” he yells. She answers and continues down into the valley as Harold scrambles to the highest branches to wave farewell, only to lose his balance and fall back to earth. Once again, the rule of three governs the rhythm. Critic Walter Kerr called this one of the “choicest” combinations of camera angle, sentiment, and gag in silent comedy. Ending with the joke, of course, effectively scrubs the moment of any potential stickiness. Another choice example of this way in which Lloyd leavens sentiment is the umbrella scene: as Harold consoles a weeping Mary after flames consume the medicine show, her teardrops and the torrential rain together occasion a display of solicitousness and practicality on Harold’s part that makes for the most genial of gags.

If the first act of The Kid Brother establishes its comedy bona fides and the second its romantic credibility, in the third Harold and Mary flow into a literal river of action. And just as he does with sentimentality, Lloyd delicately offsets the dramatic tension with humor. In terms of his career, the Black Ghost sequence in The Kid Brother is second only to certain moments in Safety Last! for sustained tension and second to none for sustained laughs. Harold, having been knocked unconscious into a rowboat by a rival for Mary’s affections, drifts into a collision with the ship we saw in the film’s opening, the Black Ghost. Within, he discovers Sandoni and Flash (Eddie Boland), the medicine show’s huckster, counting the money for the construction of the dam, which they have stolen from the Hickorys’ cabin. Harold’s ensuing rematch with Sandoni also involves a mischievous capuchin monkey that plays for both sides.

The most imaginative—and funniest—of the scenes aboard the Black Ghost make use of the suggestion of sound. It’s no surprise that The Kid Brother has sound on its mind, coming out as it did on the cusp of the transition to talkies. Gingerly, Harold boards the windswept ship. With every slamming door and bit of flying detritus, he jumps with fright. It’s a joke that gets funnier every time it’s repeated. And in perhaps the greatest “sound” effect in all of silent movies, the fast-thinking Harold tricks Sandoni by having the monkey stomp around the upper deck in his shoes, while Harold himself hides below in an armoire. Harold may lack Sandoni’s muscle, but he is nimble, outmaneuvering the big guy at every turn. His masterstroke involves a stack of life preservers that preserve his own life in an unexpected way. But before he and Mary can walk off into the sunset, Harold must contend with one last bully who is also after Mary.

Another fight? Haven’t we watched Harold and Sandoni go at it for the last fifteen minutes? How can Lloyd top that? What he does is obscure the fisticuffs in a cloud of dust that the combatants kick up on the dirt road, so that we supply the vivid details of the fight with our own imaginations. And while we do that, we also get to contemplate the lovely object of the two suitors’ desire, Mary. For Lloyd, it isn’t enough that The Kid Brother’s belly laughs give our midsections a vigorous workout—the heat generated by the laughter radiates north to warm the heart. 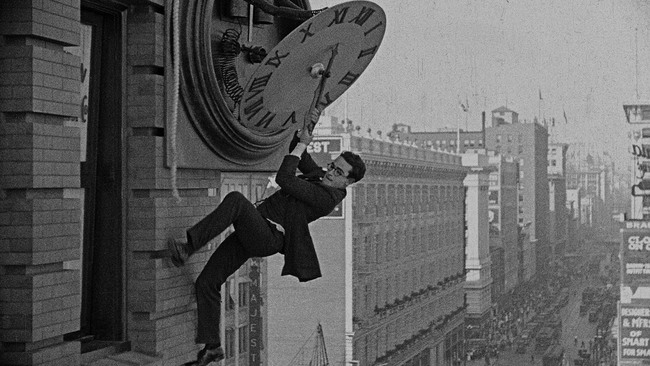 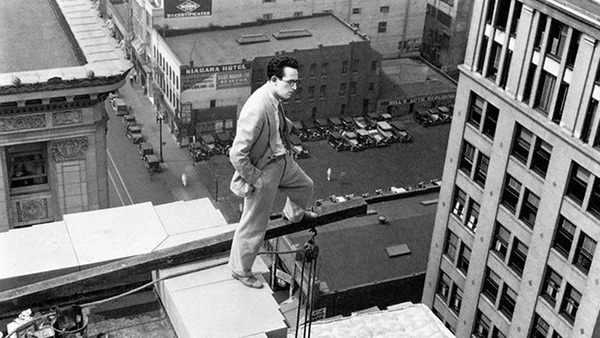 Time: Time in the Mind

Unlike any other prison documentary before it, Garrett Bradley’s masterwork poetically evokes the subjective experience of a family whose lives have been fractured by incarceration.

The Celebration: How Long Can This Go On?

With the candor and rage of many hip-hop albums of the nineties, the Hughes brothers’ controversial debut feature depicts Watts as a pitiless urban war zone with no exit.