“Of the various insects that like to make their home in our houses, certainly the most interesting, for her beautiful shape, her curious manners, and her wonderful nest, is a certain Wasp called the Pelopaeus. She is very little known, even to the people by whose fireside she lives. This is owing to her quiet, peaceful ways; she is so very retiring that her host is nearly always ignorant of her presence.”

In the library of Luis Buñuel’s house in Mexico City, there were two bookshelves that bore evidence of considerably more frequent consultation than the others: one held the works of the Marquis de Sade, the other the writings of Jean-Henri Fabre, whose volume on the mason wasp is quoted above.

Fabre’s Souvenirs entomologiques was the delight of my childhood, though Fabre did not write for children, and I suspect most very young people reading him would be scared out of their wits. “The Homer of Insects,” as Charles Darwin called him, describes the lives of the glowworm, the cricket, the cicada, the praying mantis, and myriad other tiny creatures with an empathy and keenness of observation that make the reader love them as much as Fabre did. All the more horrifying, then, when the great entomologist, a scientist before all else, relates how his characters come to their end:

I once saw a Bee-eating Wasp, while carrying a Bee to her storehouse, attacked and caught by a Mantis. The Wasp was in the act of eating the honey she had found in the Bee’s crop. The double saw of the Mantis closed suddenly on the feasting Wasp; but neither terror nor torture could persuade that greedy creature to leave off eating. Even while she was herself being actually devoured she continued to lick honey from her Bee!

Buñuel’s movies almost always feature insects—the bee Fernando Rey rescues from drowning in Viridiana (1961), the deadly scorpions of L’âge d’or (1930), the wasps that devour the dead mule in Las hurdes (1933), the fly in the martini in That Obscure Object of Desire (1977). In The Phantom of Liberty (1974), Buñuel’s penultimate film, Jean-Claude Brialy’s character disrupts the arrangement of his mantelpiece with a large spider in a glass frame: “I’m sick of symmetry,” he announces, a line that could serve as an epigraph for this film. In it, the director gives the aleatory ordering of dreams and the role of chance in waking life equal weightlessness. Indeed, it could easily be titled The Dream Life of Insects.

Fabre’s genius, and de Sade’s, for that matter, consisted in evoking the human being’s inextricable connection to nature (in the unameliorative sense of “the food chain”)—Fabre anthropomorphized the insect world, while de Sade insectomorphized the human. Reading either of Buñuel’s favorite authors reminds us that nature has no morality, and the kind we cook up for ourselves is completely arbitrary. (As Witold Gombrowicz put it, if you want to know what human morality is all about, take food away from people for three days.) Buñuel, too, never lost sight of the primacy of instinctual drives. And also like de Sade, he was, essentially, a satirist of human folly. His characters often resemble the instinct-driven monstrosities of “the Divine Marquis.” But they also have the affectionately rendered charm of Fabre’s insects, who combine ingenuity and intelligence within their narrow ken and complete imbecility vis-à-vis their actual position in the food chain.

“Buñuel’s films explore the realms of fixation and unconscious desire that elude any conventional dramatic tidiness.”

The semi-incestuous passion of the aunt and nephew at the inn, the similar idée fixe of the police commisioner about his deceased sister, the gambling addiction of ascetic monks, the autograph seekers swarming around the convicted (and simultaneously released) mass killer, the massacre at the city zoo—a few of The Phantom of Liberty’s nonstop, straight-faced absurdities—indicate how readily the human animal maintains an existence utterly contrary to its moral code as well as to its much-advertised ability to reason.

Buñuel perceived a “logical irrationality” at work in human affairs. His films explore the realms of fixation and unconscious desire that elude any conventional dramatic tidiness, though the genius of his Mexican-era films owes a lot to the selective perversion and exaggeration of melodramatic clichés and soap-operatic plots. In the films that follow Viridiana (and particularly the ones after 1967’s Belle de jour), his aversion to storytelling symmetry became steadily more pronounced. And in The Milky Way (1969), Buñuel began demolishing the few norms of Aristotelian structure he had, in his way, dressed some sets with until then. (Tristana, from 1970, marks a final nod to novelistic method, adapted from a book by Benito Pérez Galdós that Buñuel long wanted to film.)

The Discreet Charm of the Bourgeoisie (1972), The Phantom of Liberty, and That Obscure Object of Desire—Buñuel’s final three films—are his most uninhibited, and his best-realized. Not every artist has the fortune to hit his highest pitch at the end of a career. But it’s evident in all the written residua—interviews, his autobiography, accounts by his sons, friends—that Buñuel remained, all his life, insatiably curious about questions many people give up asking themselves long before reaching old age. He acquired wisdom, an unfashionable concept but a quality rather more libertine than those allergic to it imagine.

These last films are in no sense a “trilogy.” I would argue that they are three long, differently configured sections of a single film, and one of their glories—something that might not be especially flattering in the case of another director—is that once you’ve seen all three, it’s difficult afterward to say which indelible scene happens in which film.

The Phantom of Liberty has, if you like, “a beginning, a middle, and an end.” But it also has several other films with beginnings, middles, and ends running inside it, around its edges, and hurtling through it. Its roots in the Spanish picaresque—not Don Quixote, necessarily, but works like The Life of Lazarillo de Tormes, the succinct, 118-page progenitor of the picaresque, published fifty years before Don Quixote—are even more distinct than in the overlapping dreams of The Discreet Charm of the Bourgeoisie (which much resembles the ghostly masterwork of Mexican picaresque, Juan Rulfo’s Pedro Páramo). Another oneiric likeness can be found in Jan Potocki’s The Manuscript Found in Saragossa, a book Buñuel often spoke of wanting to film, an epic of ghosts and revenants, stories nested in stories, digressions that overwhelm the ostensible plot.

The Phantom of Liberty proceeds as if its sudden detours into unanticipated places were determined by rolls of the dice, and it was assembled in a comparable way, by Buñuel and his longtime cowriter, Jean-Claude Carrière, telling each other their dreams every morning. It follows the specific pattern of a less chaotic kind of narrative than the picaresque, the earliest example of which may be Leo Tolstoy’s “The Forged Coupon,” the inspiration for Robert Bresson’s gorgeous film L’argent. Tolstoy’s story follows the career of an altered item of currency and shows its effects on a succession of people who accept it as cash and then pass it along to the next person. Another such work is André Gide’s Les caves du Vatican, a novel Buñuel tried to adapt with the author in the twenties, abandoning it after three days. (The structure is rarely used, and a few recent films that have tried it are strangely inept.) 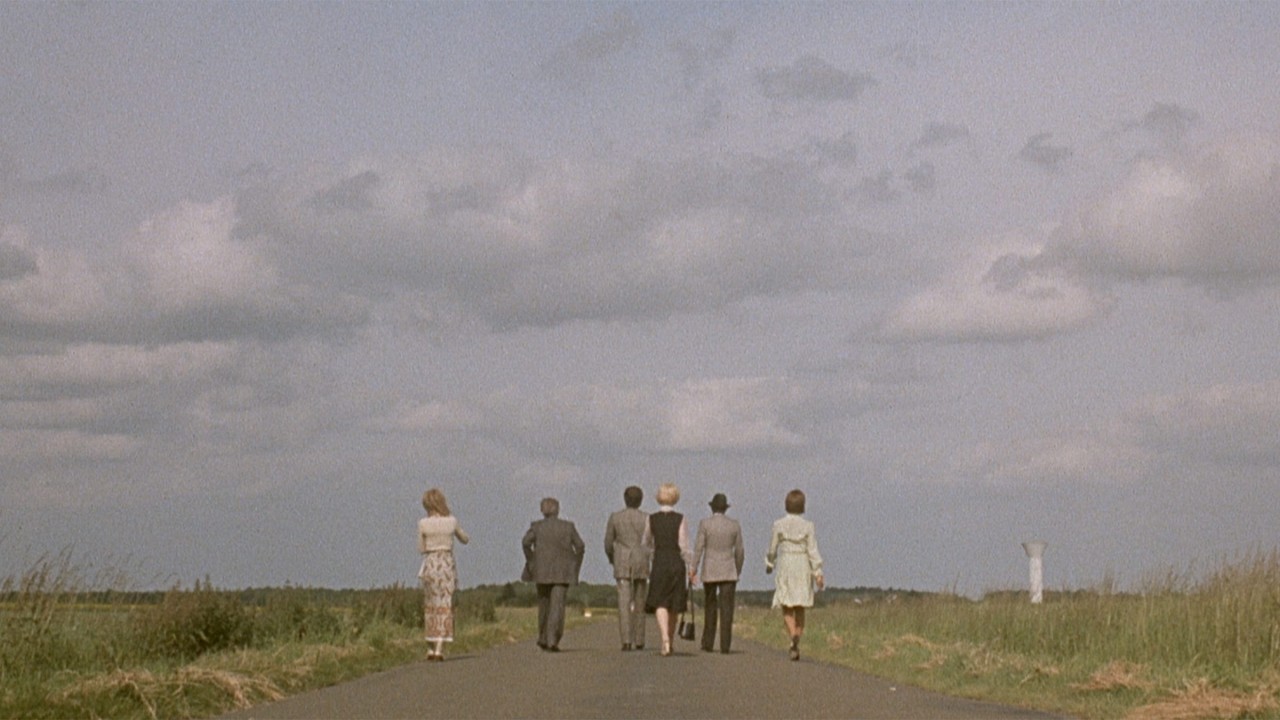 The Discreet Charm of the Bourgeoisie: More and Less
By Adrian Martin
Buy Now

“Like Dostoyevsky’s novels, The Phantom of Liberty retains its surprise quality even when experienced a second, third, and fourth time.”

Buñuel’s own description of his approach suits as well as a synopsis of Gide or Tolstoy. In published conversations with José de la Colina and Tomás Pérez Turrent, Buñuel mentions that he doesn’t especially care for Fyodor Dostoyevsky’s Crime and Punishment and thought it would be a far more interesting book if, as Raskolnikov ascends the stairs to murder the old pawnbroker, a boy on his way to buy a loaf of bread rushed past him and suddenly became the focus of the narrative instead of Raskolnikov.

As in The Milky Way and The Discreet Charm of the Bourgeoisie, The Phantom of Liberty shifts attention not only from a central character to a minor one, who then becomes central, but also from one time period to another. The film opens in Toledo during the Napoleonic occupation, as a costume drama involving executions and drunken French soldiers desecrating a church, a statue that comes to life, an exhumation. As the story reaches its climax, we hear the voice of Muni, a plump, antic actress who appears in many Buñuel films, reading the story aloud and next see her sitting with a friend on a park bench in present-day Paris.

Muni leads us to the prepubescent daughter of Brialy and Monica Vitti, who leads us to them. Brialy goes to his doctor’s office; during his examination, a nurse, played by Milena Vukotic, gets word that her father is gravely ill and leaves to drive to a distant hospital. The film follows her as she drives into a rainstorm and seeks refuge at an inn, where several monks stranded there rope her into a poker game; they’re eventually joined by a young man and his aunt who’ve just arrived and a flamenco dancer and her husband. It would be criminal to go on, and silly to relate the “plot” of The Phantom of Liberty, since the film is a compendium of surprises. Like Dostoyevsky’s novels, The Phantom of Liberty retains its surprise quality even when experienced a second, third, and fourth time: you find yourself intensely wondering what happens next, when you know perfectly well what happens next.

What does it mean? Phantom of Liberty? Buñuel joked that the title was a collaboration between himself and Karl Marx. It also seems jejune to suggest interpretations, since Buñuel deflected all incitements to explain himself and insisted that nothing at all in his films was symbolic or had the significance people attached to his recurring motifs. He liked the appearance of a peculiar bird—I think it’s called an emu—so he put one in. When he cast two actresses in the role Maria Schneider had been fired from in That Obscure Object of Desire, Buñuel merely threw the idea out to Serge Silberman, his producer, as a joke. Silberman thought he was serious, that it was the perfect solution—and that’s what happened.

At the end of his life, Buñuel had achieved such fluidity in his filmmaking that he could take Phantom in any direction that occurred to him, along the path of the previous night’s dreams, fantasies from childhood, premonitions of approaching death, or, if he’d cared to, into outer space. To call him a film director is like calling Albert Einstein a mathematician. There was no artist like him ever, and there will never be another. He didn’t simply direct a film called The Phantom of Liberty; he was the Phantom of Liberty.

This piece was originally written for the Criterion Collection in 2004.​

In this shape-shifting exploration of creativity, couplehood, and artistic influence, Mia Hansen-Løve offers a glimpse at the existential heavy lift required by her deceptively simple autofictions.

This Is Not a Burial, It’s a Resurrection: Staying Power

Filled with evocative images and guided by the unique aesthetic sensibility of the landlocked kingdom of Lesotho, Lemohang Jeremiah Mosese’s film is an exploration of the power of grief that is paradoxically uplifting.

Lars von Trier’s Europe Trilogy: Straight to the Bottom of the River

One of contemporary cinema’s most provocative filmmakers launched his career with three deeply unnerving, deliriously genre-blending portraits of Europe.

Imitation of Life: On Passing Between

In its ambivalence toward its provocative themes, John M. Stahl’s groundbreaking exploration of racial identity demonstrates the insolubility of Hollywood’s representational conundrum.